Time – again – has flown by and I have struggled to find quiet time to  write a small entry about this trip with the kids, mid July this year.

The purpose of our 10 day vacation was to visit my in-laws; have the kids spend some equality time with their  grandparents and some of the cousins they almost never see. The plan, also, was to spend the last 5 days in Chicago, a city that I had been to before with my mom and sister, and where my husband used to live for a couple of years.

We mentally prepared for some hot sticky and humid weather; coming from the desert, I was not exactly looking forward to it, but the words trip and vacation made the weather loose priority in my short list of travel inconveniences.

When I found out it might rain a little, I  actually looked forward to it. This California drought has made us change our perspective towards rain.

The only big cities our kids knew before going to Chicago where San Diego and Los Angeles, and L.A. not so much the chaos of downtown, but rather the surrounding areas and of course, the endless stop and go traffic.

So the extremely tough traffic,  the dozens of people honking horns, the endless streams of homeless people walking down the busy streets,  even at the fanciest areas of downtown Chicago, were a bit overwhelming for them at times.

We stayed at a hotel in the middle of everything, right by  Michigan Avenue, so we saw the many stores, restaurants and hotels, museums mixed with this large population of homeless mixed in everywhere, from the subway stations to the doorsteps of Department Stores.

I told them, “this is part of your travelling and learning experience. You need to know how other people live, what problems other cities have , even the challenges that the weather presents for them”.  In our home town we don’t really have “weather”, it is mostly the same year round, except for 3 or 4 months where the heat can reach -and pass- triple digits.  Other than that, it is actually boring weather -and too dry.

To think that traffic, pollution and homelessness gets worse with feet of snow or inches of rain is also something to consider -and maybe even value when we get tired of our Perfectly Sunny California Days.

My daughter was excited about  shopping and about the different stores she saw there – like the Nutella Cafe and the most adorable Candy Store, a big two story shop dedicated entirely to candy. 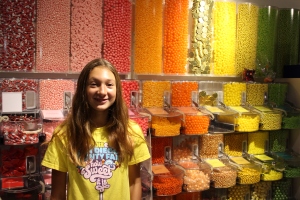 My son said that one of the things he liked the most about Chicago was the diversity of its people. He said, “I see Asians, Hispanics, African-Americans, people from India, and the middle east, Europeans, etc”

I had meant to make this a trip that was cultural and educational  as much as it was fun and entertaining.

So my husband and I had come up with a list of places we did not want to miss:

The Art Institute of Chicago.  The place is big but safe enough for the family to disperse, so my son went on his own most of the time; I took my daughter to the most interesting and popular exhibits (for a 12 year old). She had asked if there were any paintings by Degas, with Ballerinas in them, so we started the tour at the Impressionism Wing. She took many pictures of the pieces she liked. She had never heard of pointillism, so when she looked at the magnificent masterpiece by Georges Seurat (A Sunday afternoon on the Island of La Grande Jette) she stood in awe in front of it, for a full ten minutes – maybe more.  We had arrived early to beat the crowds so we had a lot of room to admire the art from different angles without a rush.

Clearly uncomfortable with nude figures still, we breezed through the exhibits of the earlier European Art and the Greek, Roman and Byzantine Art.  Towards the end, we visited the  Modern Art wing, where, no matter how hard I tried to be open and appreciative, I had  a difficult time finding pieces that amazed or moved me.

Millenium Park:  we walked along this park and it’s different sections. The Symphonic was practicing for an evening performance at the Jay Pritzker Pavillion, so we sat for a while to listen. It was strange to see an orchestra playing in jeans and T-shirts, and abruptly interrupt their playing, cutting off short their pieces as the director indicated to restart or skip to another piece that needed polishing.

As my daughter observed the structure of the venue, she said to me “Mom, this place looks a lot like the Walt Disney Symphony Hall in L.A. Maybe the same Architect did it?”  I had to agree , it was exactly the same style and material used. So I quickly googled it and found that , in deed, Frank Gehry had designed both venues.

I felt proud of her , of the fact that at age 12, she noticed and pointed out  these things.

I realized then, that I was doing the same thing my mom always tried (and accomplished) with us: made travelling both didactic and entertaining.

The Museum of Science and Industry

We hesitated a bit about this visit, because it is not near the city center and the majority of the other attractions, but I am so   glad we went. The place is huge, big enough to be there a full day or even two.  So we had to pick and choose the exhibits that were not appealing the our kids.

There was everything from Climate and Weather,  with a very cool tornado simulator, airplane simulators, exhibits related to the human body:  the development of an embryo into a fetus and finally a baby, as well as other exhibits explaining the benefits of exercising and healthy eating;  optical illusions (mirror maze), Oceans , Coal Mines,   Ships and Train Galleries, it went on and on.

In my opinion, it is a must see for any family with kids in Elementary or Middle School, we left that museum out of tiredness, not lack of interest.

We have seen pretty decent Aquariums here in Southern California, but none of them compares to this one. The location is prime, the views of the lake are amazing. The exhibits are so well planned and designed and the live show we watched was an amazing learning experience for all – kids and adults.

This was probably the most crowded site, there are dozens of field trips , we could barely walk at times, so we had to be super patient getting places. 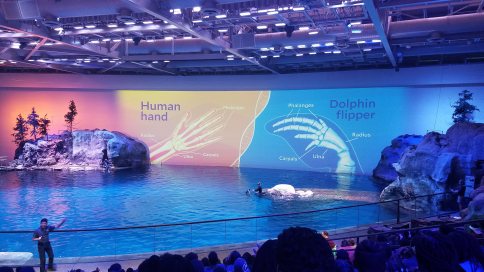 Even though I had already taken the Architectural Tour with  my mom years ago, I took it again and enjoyed it quite a bit. Chicago’s landscape is unique and beautiful and a lot of its buildings carry many years of important history. We saw what once was Marshall Fields, the Stock Exchange, The Wrigley building , the Tribune Tower . The contrast between the old and new is dramatic, yet it pleases the eye. There is nothing better than to see it from the river.  I highly recommend it. 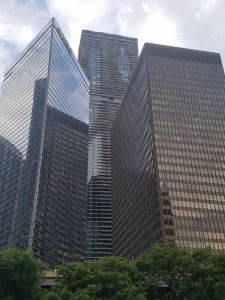 Chicago was fun, wet, colorful and delicious. I want to believe that the kids are old enough to remember this trip for many years to come and also that it helped them appreciate our weather, drought or not, as well as the many  blessings they have:  having a warm home and a full stomach when they please, after seeing so much misery in some of the streets of the windy city.